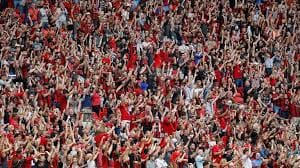 FIFA’s Best Award ceremony was held in Milan a short time ago, with a rake of world football’s most-recognisable stars having been rewarded for their performances over the last 12 months.

This evening’s event marks the 4th annual edition of the Best ceremony, after FIFA brought an end to their association with the Ballon d’Or.

The award show features prizes for the likes of Goal of the Year, Fan of the Year and Coach of the Year.

However, without doubt the most prestigious accolade handed out is that for player of the year, with the trio of Lionel Messi, Cristiano Ronaldo and Virgil van Dijk having been up for the title this time around.

Van Dijk and Messi were viewed as the front-runners by most, with the former having already been crowned the UEFA Player of the Year last month.

Tonight, though, it was Barcelona talisman Messi who came out on top.

Congratulations to all! Well deserved! 👏🎉🎊

Liverpool duo Alisson and Jurgen Klopp have also been crowned, as the Best coach and goalkeeper of the last year respectively, on the back of the Reds’ charge to Champions League glory last season: