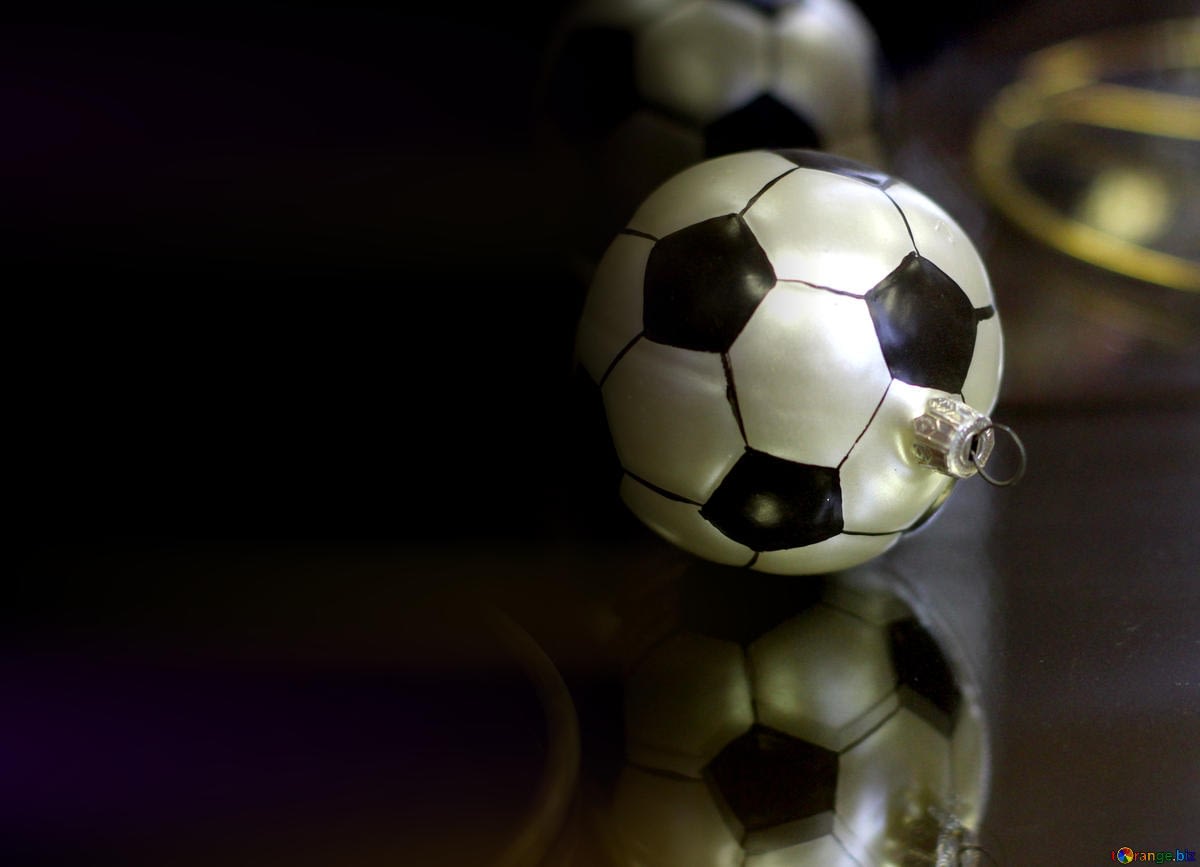 Ralf Rangnick said only won because of goalkeeper with the interim manager saying his players’ body language was not good enough against a battling side.

Though United left Carrow Road with a 1-0 win thanks to a penalty, the performance was far from one of dominance against the Premier League’s bottom side.

Rangnick afterwards said his forwards failed to insert the intensity needed to play his way while also praising the hosts’ performance. 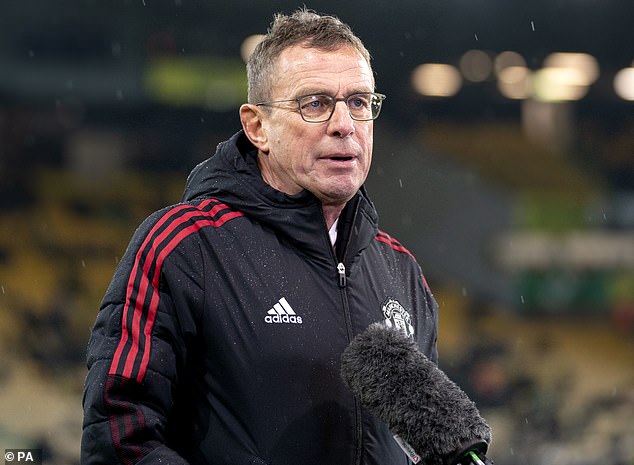 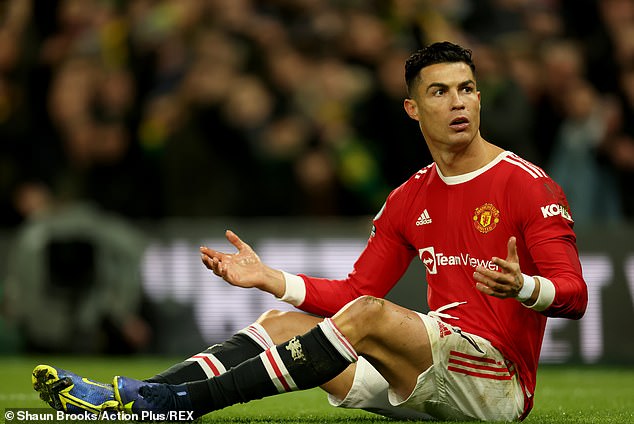 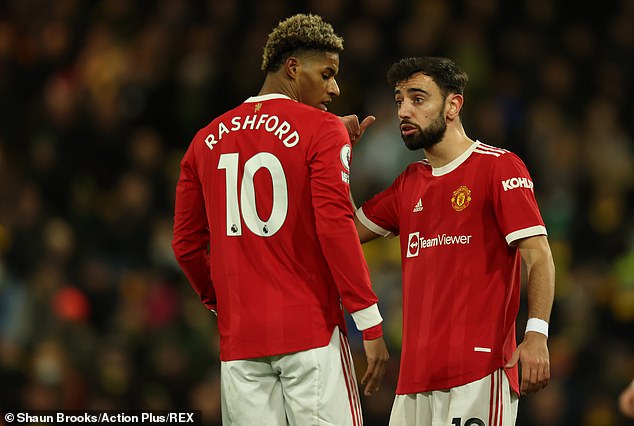 United would have lost against most sides in the league with that display, said Gary Neville

‘I’ve told Dean (Smith) that Norwich didn’t play like a bottom team,’ Rangnick said. ‘In the second half we had better body language up front but we still allowed them to have chances. In the end it is David De Gea who won us the game.’

Continuing on his attacking players, which included Ronaldo, Marcus Rashford, Jadon Sancho and Bruno Fernandes, Rangnick said: ‘The body language, the intensity, the aggressiveness, especially in our offensive department – I don’t only mean the strikers but also the two No 10s – we didn’t play on the same intensity level as we did against Crystal Palace. But that also had to do with the way Norwich played.’

Gary Neville also bemoaned United’s toothless display, telling Sky Sports: ‘I don’t think it was a very good performance. I think against any other team in the league they would have caused them real problems.

‘They’re gonna go to Brentford and they’re gonna have to play better than that or they will get beat but I do think they will. 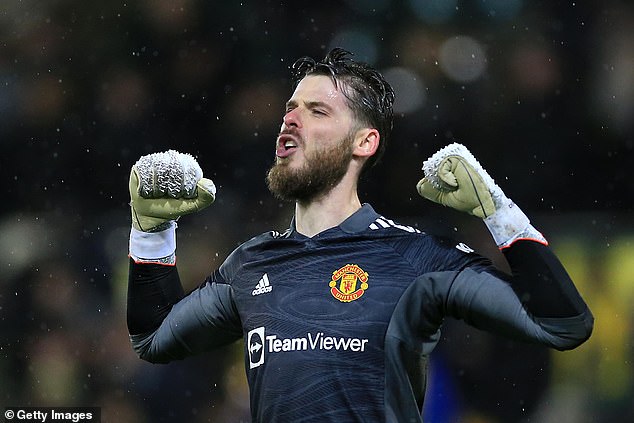 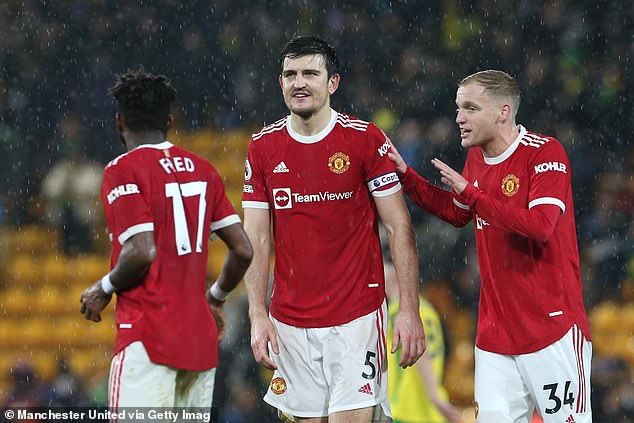 However, Rangnick afterwards said his forwards failed to insert the intensity needed to play his way while also praising the hosts’ performance

‘It was a strange one to see what happened today on the ball and off the ball. Those players have had a free week to prepare so I was expecting a ferociously frantic start to the game, high pressing, quick play but it was lethargic from minute one.

‘On the ball they were so sloppy it’s untrue I mean they just gave it away so many times it was unbelievable.

‘Any other team in the league there playing against Man United today at least gets a point but maybe wins that game.’

He added: ‘It was Norwich’s lack of quality why Man United kept a clean sheet today. Last week against Crystal Palace they had one moment but it was a good defensive performance. Had good structure to them. 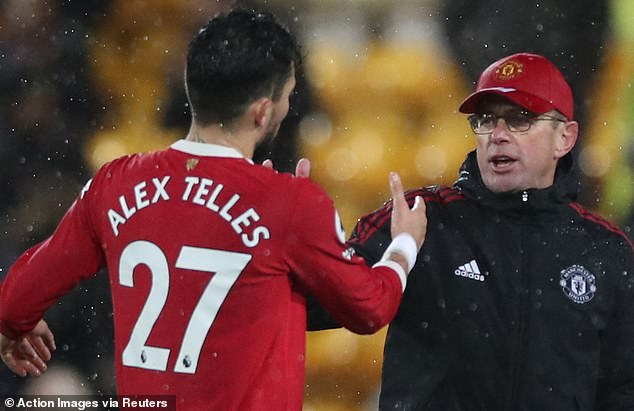 ‘Today any other team in the league, they would of had the quality to cut through Man United there were spaces there in wide areas. Even in the second-half they were getting through the middle of them.

‘Norwich didn’t have the ruthlessness or final piece to finish Man United off. Clean sheet by fact goalkeeper made a few saves and the team they were playing against are the worst in the league from an attacking sense.’

Worryingly, Victor Lindelof needed substituting after having trouble breathing. But Rangnick said the centre back seemed fine following treatment and could face Brentford on Tuesday. ‘They have done all the tests and he seems OK,’ Rangnick said.