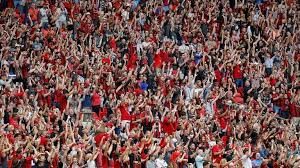 Red Bull Salzburg striker Erling Braut Haaland has teased a potential move to the Premier League in the future after a stunning start to the season.

In just 10 games across all competitions, Haaland has scored a sensational 17 goals.

He made headlines in the last round of Champions League games too, when he scored a hat-trick on his debut in the competition.

The 19-year-old scored his three goals against Belgian side Genk in a 6-2 win for Salzburg.

Only Raul and Wayne Rooney have managed a hat-trick on their Champions League debuts in the history of the competition.

That’s clearly put him on the map, and he’s already been talking about his aspirations.

Safe to say, he’s got the Premier League firmly in his sights.

Speaking about former boss Ole Gunnar Solskjær, Haaland claimed his countryman has had a huge impact on his life.

“He has had a huge impact on my life, both as a person and as a trainer,” He explained to TV2, as cited by the Mirror.

“He won the Champions League and was an incredibly good player. He has taught me a lot.”

As a result, Haaland has suggested that he could follow in the footsteps of Solskjær and move to the Premier League.

“I have dreamed of playing for the best clubs in the world my whole life, and I especially like English football,” he continued.

Safe to say, Manchester United boss Solskjær will be keeping an eye on his countryman.

Who knows, a move to Old Trafford could even be on the cards for Haaland if he continues to impress.

Learning from the best @iamzlatanibrahimovic