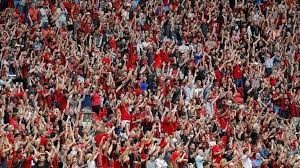 The Video Assistant system has taken its place front and centre in the Italian headlines late on Sunday night, for all the wrong reasons.

AC Milan welcomed Napoli to the San Siro a short time ago.

The clash marked a crucial in the race for the Serie A title, with the two sides, ahead of kick-off, having been separated by just three points.

It was hosts Milan who boasted the advantage heading into proceedings, aware that a victory would guide them within just a point of city rivals Inter at the division’s summit.

When all was said and done, however, Stefano Piolo’s men fell short.

A solitary goal, netted by Elif Elmas inside five minutes, ultimately proved enough to guide Napoli to all three points, and back into 2nd in the Serie A table:

Napoli have taken an early lead in Milan!

A perfect header from Elif Elmas 🎯

As alluded to above, though, the eventual result at the San Siro did not come without its controversies.

As proceedings got set to roll into time added on, it appeared as though Milan had bagged an all-important equaliser.

After the ball dropped fortuitously to Franck Kessie in the Napoli area, the Ivorian international made no mistake with his ensuing finish, slotting into the far corner to spark chaotic celebrations both on the pitch and in the stands.

A twist, however, remained in the tale…

After Davide Massa was called to the VAR monitor to look back over replays of Kessie’s finish, the man in charge of proceedings eventually came to the decision that Milan’s equaliser would be disallowed.

This came amid altogether bizarre circumstances, as Olivier Giroud, grounded and making no real attempt to play the ball, was adjudged to have interfered with play from an offside position:

Franck Kessié thought he’d scored an equaliser against Napoli, but VAR rules it out for offside… ❌

Another frustrating moment for Milan.

The call has since sparked nothing short of an uproar across social media, amid claims on the part of many a fan that Milan were left on the receiving end of ‘the worst VAR decision ever’:

Just seen the worst VAR decision ever . In the AC milan game

AC Milan have been absolutely robbed. Absurd decision from VAR and the ref.

Litteraly, can’t believe it. Worst decision ever but tbh Milan should have put the gas open earlier to get the win.

VAR is wrecking football. One of the worst decisions I have ever seen

Milan got robbed. Nothing new.

This is hands down. The worst decision I’ve ever seen.